Who was Dr. Claire Weekes? 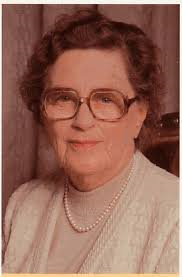 In 1973, I was at a point in my life where I believed that I had become insane. What was going in my mind, and what I was experiencing in my world, was indescribably terrifying. Worst of all, I felt totally alone, cut off from the real world, and in a place where I believed no other person had ever been. I believed that there was no one who understood what had and was happening to me, the terror that I was experiencing, or who could tell me what I had to do to regain my sanity. Then I discovered Dr. Claire Weekes and realized how very wrong I was.

Dr. Weekes clearly understood how bewildered and frightened I was. She confirmed this by speaking the language that only a person in my condition could speak. She described the terror in my mind perfectly, as well as all the frightening physical symptoms that I was experiencing. How was it possible that she could do this?  There could only be one explanation, personal experience. She had been there too.

Dr. Weekes was misdiagnosed with Tuberculosis, when she first consulted doctors about her own nervous suffering  and panic attacks which had developed at the age of 26 when she was studying for her professional examinations. This was confirmed in her in a 1983  interview with Dr. Robert L Dupont, which he described in his book titled The Anxiety Cure.

Her struggle with this problem, gave her the experience that afforded her the ability to put her training as a scientist and medical doctor to work. She discovered how her biochemical response to panic and fear could be changed by altering her attitude, and resulting mood. She was able to identify a harmless physiological condition that she termed “sensitization” as being the cause of the frightening symptoms that a nervously ill person experiences.

She also discovered that a sufferer’s bewildered and fearful reaction to the symptoms of sensitization were the pitfalls that kept it alive, in some cases for many years. With this understanding, Dr. Weekes set about to change her response to her symptoms. As a result, she healed herself after two years of suffering.

As a medical practitioner, Dr. Weekes witnessed the same suffering and long-term effects in many of her patients. They were suffering from panic attacks, agoraphobia and, anxiety, all generally described as nervous breakdown, although termed “nervous illness” by her.

She also noticed how psychiatric and psychoanalytical treatments failed to provide relief for these sufferers. Using her discoveries and experiences plus behavioral and cognitive  therapy skills that she had learned, Dr. Weekes developed a treatment method that produced results. She rejected the idea that nervous illness was caused by psychological events of the past or personality flaws. Instead, she identified our natural response to the fearful symptoms of harmless sensitization as being the cause of the cycling perpetuation of the very same symptoms.

She managed develop a successful recovery method by firstly educating the sufferer about the harmless symptoms of sensitization, thereby removing bewilderment and the 1st fear. This was followed by unmasking, anticipating, recognizing and responding differently to 2nd fear. Her approach resulted in the sufferer’s ability to behave differently and to reverse the cycle of anxiety.

As a result, she unmasked nervous illness and was then able to explain the condition in a way that lay people could easily understand.

After teaching her patients how to heal themselves, Dr. Weekes went on to help sufferers throughout Australia, England, and America. Her numerous requests for personal support around the world were met via a series of self-help books, audio tapes and records, journals and radio broadcasts, including lecturing on the BBC.

Her 1st book, Self Help For Your Nerves, was published in 1962. It teaches sufferers everything that they need to understand and deal with sensitization and their general state of anxiety.  In my opinion, it is an excellent “end of search” solution for people who are heading for, or who have already suffered a nervous breakdown.

Her 2nd book, Peace From Nervous Suffering was published in 1972. The book speaks directly to the agoraphobia sufferer. This comprehensive manual to recovery gave me all the understanding and tools that I needed in 1973 to fully and permanently recover.

In 1976, Dr. Weekes wrote, “Agoraphobia – Simple Effective Cure” which speaks to the medical professional who is working with agoraphobia sufferers.

Dr. Weekes then went on to publish “Essential Help for Your Nerves” that is a two-in-one edition of “peace For Nervous Suffering” and “more Help For Your Nerves”. She never retired from her work helping nervous sufferers around the world, as her final book “The Latest Help for Your Nerves ” was published just one year before she died in 1990. Her books have been published in 8 different languages with hundreds of thousands of copies being sold and still selling.

As the first woman ever to earn a doctorate in science at the Univerisity of Sydney, Dr.  Weekes started her career in Australia as a research scientist.  She then qualified as a medical doctor and worked as a physician and health writer in Australia from 1903 – 1990. In  honor of her achievements as she was awarded a fellowship at the Royal Australasian College of Physicians.

Using her diagnostic advantage of being both a scientist and physician, Dr. Weekes’s professional focus became helping suffers of nervous illness to understand what had happened and how to help themselves to recover permanently. She accomplished this by talking on radio and appearing on TV shows around the world.

Watching and listening to recordings of her speaking and witnessing her passion, it is easy to understand why she was so well received. As her method for recovery achieved success, she became well known around the world as a doctor with a method that produced results. In 1978, she was awarded a civil membership of the Order of the British Empire (MBE) for medicine. This is an honor that recognizes people of outstanding merit and who have made a significant difference in their field. In recognition of her achievements in pioneering self-help psychiatry, Dr. Weekes was nominated for the Nobel Peace Prize for Medicine in 1983 and again 1990.

The above mentioned honors bestowed upon Dr. Weekes are easy to understand when one notices how the majority of her book reviews include the words, “life-saving”.  Only because of my good fortune in stumbling across one of her books in 1973, was my life also saved, and kept agoraphobia free for more than 40 years.

Dr. Clair Weekes’s books are available from all of the well known on-line bookstores.

Sorry, the comment form is closed at this time.