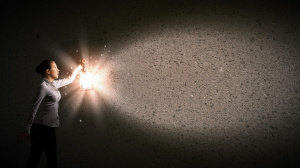 As an agoraphobia sufferer, whenever I left my home, I was aware of the ultimate big panic that was looming in the background, just waiting for the right moment to overwhelm me. The distance between me and my home felt like a block of space between us.

It was always an uncomfortable, background feeling that just would not go away and, as a result, interfered with whatever I was doing. The feeling was blended together with my vague, imagined ultimate panic experience, which I always felt was just waiting to pounce. Cowering away from it was my natural response. I was always just hoping and praying that the panic would not come, or that I would be able to cross the distance back to safety before I became overwhelmed by the fear.

All of this changed after learning from Dr Weekes how to accept, face and float, as well as practicing right action readiness. It was then that I discovered that fear does not like to be watched. Whenever I sensed that uncomfortable, background feeling, I would physically turn my body towards the space between me and my home, and then mentally look at it, almost like shining a light onto something in the darkness. At the same time, I would allow my body to assume a limpness. I would then mentally float towards wherever I sensed the fear to be coming from. I would deliberately, look for it in a mental way, not allowing it to slip back into the darkness of the background of my mind as it were. Mentally, I tried to pierce the vagueness and instead tried to force it to come out of the darkness and into focus. But it would not, no matter how hard I tried.

Instead, the looming fear feeling seemed to dissolve. This encouraged me to look harder, or seek it out harder if you will. The more I did this, the more the fear seemed to dissolve.
On page 148 of her book titled Agoraphobia – Simple Effective Treatment, Dr Weekes confirms this phenomenon: “Fear does not like being watched. It’s at its best when you shrink from it blindly: then it can put on its most terrifying act”.
The “terrifying act” that she refers to is that vague, imagined ultimate panic that looms in the background. Watching it, as she puts it, worked for me, and from what I have researched, for thousands of other agoraphobia sufferers who she treated.

I also found watching fear to be a very effective way to deal with setback. After long periods of being completely free of agoraphobia, only to have it suddenly reappear, I would immediately watch it. Every time I did this, it would go away. Finally, after responding in the way many times, agoraphobia’s reappearances simply became a nuisance, like a toothless dog that keeps barking and trying to bite.

Sorry, the comment form is closed at this time.